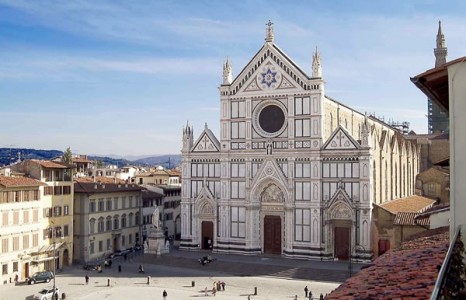 The largest basilica of the Franciscan order started in 1294. It is also called 'the Pantheon of Italian glories' because here the mortal remains of Michelangelo Buonarroti, Galileo Galilei, Niccolò Machiavelli, composers Giaccomo Rossini, Luigi Cherubini, Mykolas Oginski, poets Vittorio Alfieri and Ugo Foscolo are buried. The monumental tombs were created by the artist such as Vasari, Canova, Foggini and others. Nevertheless the church hosts about three hundred tombs they don't overwhelm the visitor. The interiour of Santa Croce is quite spacious.

Giotto painted the first religious scenes with naturalism of the early renaissance style of the 14th-century in the Bardi and Peruzzi chapels near the High altar. Cimabue‘s Painted Crucifix is housed in the museum of the basilica, a survivor of the flood that hit Florence in 1966.